Supervised by the Communications Manager, the men and women of this section handle 9-1-1 and non-emergency calls that come in for city services after hours and coordinate all radio traffic for the city. They must promptly and courteously:

The center handles more than 52,000 – 911 calls and 130,000 non-emergency phone calls annually and processes well over 100,000 individual calls for service for the various agencies served by the center. This makes the Apopka Communications Center one of the largest volume centers in Central Florida.

Additionally, Apopka's communications center is a regional dispatching center handling all calls for the Maitland Police Department, Eatonville Police Department and the associated public services entities for those cities.

Although the 911 or non-emergency call may come to the Apopka center for fire calls for those cities, the call is transferred to the Orange County Fire Department for call processing.
Citizen Online Reporting
News Room 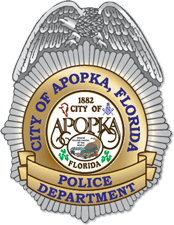